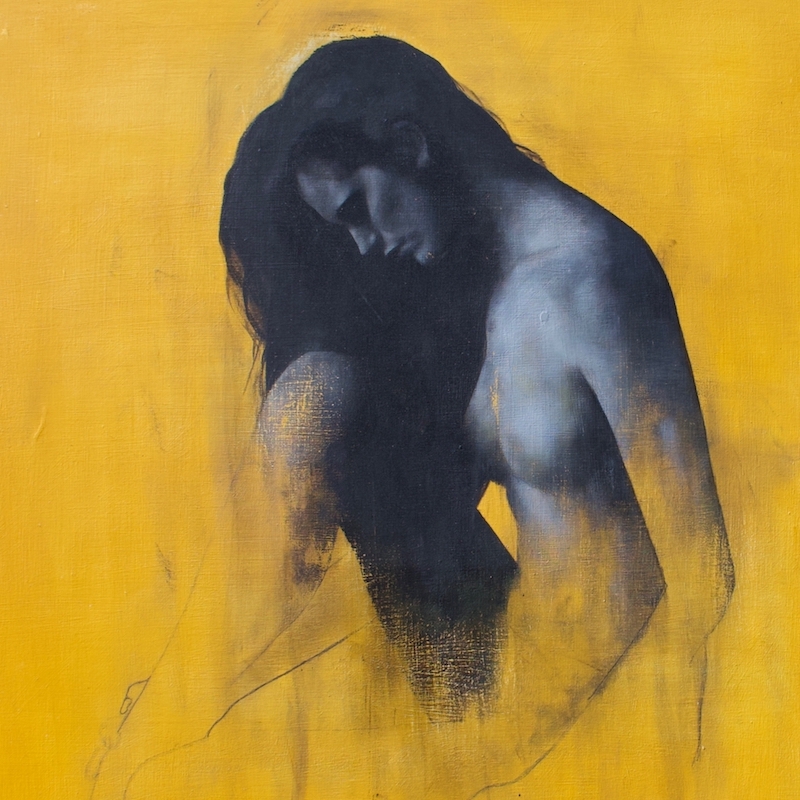 Biography Exhibitions
Patrick Palmer is a classically trained artist based in Berkshire, the United Kingdom. He creates sensitive, emotive, and beautiful paintings and drawings of the nude female form.

Palmer’s art is a mixture of realism and a style that pushes the boundaries of interpretation beyond artistic convention. Overall, his compositions avoid predictable scenes and instead depict imagery that reduces and enhances certain aspects of the human form to transform it into the viewers’ eyes. Furthermore, his paintings capture his draftsmanship and imbue the painting with drawing-like properties.

His paintings focus on the female body and highlight the interesting shapes found in its nude form. Patrick Palmer showcases his own personal interest in portraying curves in his work. He believes that curved lines are better in a composition as they lend themselves to creating good art. Furthermore, through his artistic practice, he strives to capture raw emotions and feelings.

Patrick Palmer works from photographs he takes during his organized photo shoots with professional models. His creative method often involves looking at over two-hundred images from each shoot to decide the theme for his next creative endeavor. Once he chooses a couple of photographs, he uses them to create his paintings. He prefers to work using the high-quality large prints of the photos as his paintings often take months or even years to complete.

To create his paintings, Patrick Palmer uses oil paints, a variety of hard and soft brushes, rags, sponges, and his fingers on canvases and boards. His technique consists of building up thin layers of oil paint and using his fingers or other materials for blending and adding texture. He used to work with charcoal before specializing in oil painting. Sometimes, he still uses red chalk to create drawings.

His body of work finds inspiration from everyday events he experiences as everything can become an influence on his creativity. Furthermore, the work of his favorite artists, Edgar Degas, Pablo Picasso, Auguste Rodin, and Gustav Klimt inspire him as well. Additionally, the designs of Spanish architect Antoni Gaudi influence his depictions of the nude form. As a result, Palmer often tries to emulate the concepts of Gaudi’s architecture within his work.

Up until the age of forty, Patrick Palmer worked in the media but decided to attend art college and focus on being a painter. While maintaining his office job, he often attended life-drawing classes during his leisure time, which prompted his decision to pursue art instead. In 2008, he would officially begin his art career. He earned a Bachelors in Art with honors from the Oxford Brookes University in the United Kingdom. Furthermore, he received a diploma from Heatherleys School of Fine Art in London and from the National College of Art and Design in Dublin. Additionally, he underwent years of professional mentoring from Michael Clark, a contemporary British artist, and from Bobby Gill, a contemporary painter and honorary fellow of the Royal College of Art (RCA).

Palmer’s paintings exhibited in various solo and group exhibitions throughout the United Kingdom. His work regularly displays in art galleries in London, Paris, Glasgow, and New York. Among his many recognitions as a painter, the most notable one includes One Fine Bid naming him one of the top ten best contemporary portrait artists. Furthermore, his work featured in two books, Images of women in Art and Musings of Miss Yellow. Additionally, his paintings received editorial coverage in publications such as Home House Magazine, City AM Magazine, FAD Magazine, Art Aesthetics Magazine, and the Saatchi Catalogue.

Patrick Palmer continues to specialize in the female nude and portraiture artistically. One day he hopes to gain international recognition as one of the best figurative artists.
List of past exhibitions/shows:

The world's best in provocative art

Straight to your inbox

Let us show you something you haven’t seen before. Welcome to Art Provocateur Gallery.

By clicking "Join Now" you acknowledge that you are 18+ years of age and agree to receive the Art Provocateur Gallery newsletter from which you can unsubscribe. You agree to APG's Terms of Use and Privacy Policy.